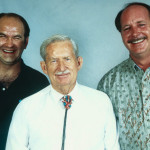 Eddie Tullock was my mentor in the world of trade show magic. He was considered the king of this wrealm where he performed for over 40 years. Below are a few things I remember most about this legendary magician.

I met Eddie Tullock when he was at the end of his illustrious career. His good friend, Ed Rosenthal, provided the introduction and help nurture our friendship that turned into true mentorship.

It is estimated that Eddie Tullock performed at over 2000 trade shows during his career. He collected the exhibit hall badges from each show and they filled boxes. His clients were a whose-who of corporate America and they truly loved him. What’s not to love about the man who brought thousands to their booth, made the guests squeal in amazement and set the stage for the sales people to talk to potential customers.

He was kind in a cowboy sort of way… salt of the earth and very savvy about life. He had a rare gift with people as I never met a person who didn’t think the world of him. Even though he performed for hundreds of thousands of people, he was a private man. He loved being at his ranch in Wickenberg, Arizona with his horses and wife.

Magically, he was very complex. Known for his stellar card work he could hold his own in any conversation about coin magic, stage illusion and even mentalism. He always had keen insights into what would make a trick better.

Few know of his most preposterous card stunt… the ability to tear a deck of cards in half and then into quarters. He tried to teach this to both Kenton and me, yet neither of us ever got the hang of it. Eddie would simply pick up a deck, hold it tight and slowly tear it in half and then he’d take one of the halves and tear it again. Simply impossible.

Eddie was a rare give in any magician’s life. I will always cherish those Tuesday afternoons we spent together with his friend Ed Rosenthal… we called them Tuesdays with the Eddies.