Inside the WC Fields Bar
; 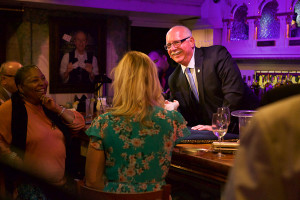 One of the greatest honors a magician can receive is an invitation to perform at Hollywood’s Magic Castle. Being put on the Castle’s “Now Appearing” performer’s list is a rare privilege. Gene Urban is one of those fortunate few who get to call one of the Magic Castle Hollywood theater’s home for a week.

I auditioned for the Magic Castle with hopes I’d get the call from entertainment director Jack Goldfinger. Earlier this year I got the call with a request to perform in May at the fantastic WC Fields Bar. Exciting!!
I performed magic at the WC Fields Bar during the week of May 11th – 14th. The WC Fields Bar is located in a secretive underground region that is also home to the Peller Theater and a member’s only library. 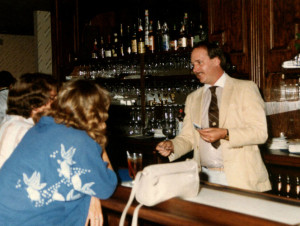 Gene performing at James Place circa 1987

Gene Urban is no stranger to bar magic, in fact, his early career was focused on this particular style of magic. Gene was the house magician at several bars for many years including Spanky’s Saloon, Gizmos and a visiting magician at the Magic Lounge, all in San Diego, CA.

After leaving James Place, Gene added his magic to several other top resorts including a splendid time performing with his long-time mentor and world renown bar magician JC Wagner. Urban and Wagner opened “The Magic Lounge II” in Fountain Hills, AZ where they obtained a one year lease. 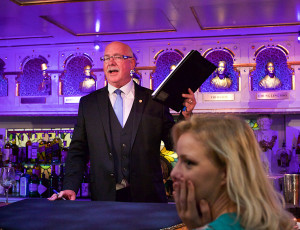 There truly is something special about the Magic Castle. It oozes history, stories, and magic in every nook, hallway, room and theater. There is nothing like it anywhere else on the planet and explains why it is considered among the most exclusive private clubs in the world.

As a performer, it’s darn special to work at a place where every guest is there to be amazed, entertained and witness magic. It sets the stage for astonishing things to happen, and they do.

I had a great run this past week, met lots of charming people and was humbled by the many kind words they shared about our time together. I can’t wait to come back!

Hire Gene Urban for Your Event